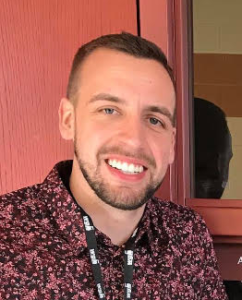 Bobby Glass currently resides in Mechanicsburg, Pennsylvania and has enjoyed many years in the pageantry arts as a performer, instructor, and adjudicator. His marching career started in high school and continued afterwards with the Carolina Crown Drum and Bugle Corps from 2008-2012, Cadets2 2012, and then one season each with Field of View (2009) and Black Watch (2011) winter guards. Recently, Bobby served as one of the designers and head instructor for the Red Land/West Shore School District color guard programs for the last 10 years. He has also been involved with various other marching band and indoor color guard programs in the Pennsylvania and Maryland areas. He has been an adjudicator since 2015 and worked with Cavalcade of Bands, Cavalcade Indoor, and USBands. Professionally Bobby holds a Bachelor of Science in Business Administration from Central Penn College and is currently a Project Manager and Designer for Field and Floor FX.